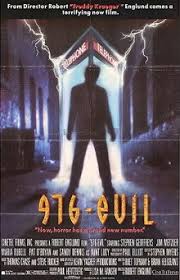 Could not find the thing on my Netflix account so I went to Amazon prime where I had to pay to rent the film. I had no problems with that. I got a free gift card I never used.

Was it worth the price? Not really.

Robert Englund( The man who plays Freddy Kruger) directed this, what I will say, unique horror film, for the time. I can feel elements in the movie that suggest Englund learned a few lessons from Wes Craven and Stan Watson who directed and made the visual effects for a Nightmare on Elm street. 976-Evil was actually very colorful and visually attractive.

The unique story however was not that interesting when laid out. Kinda reminded me of something Clive Baker would write. It’s about a rebellious kid who finds a number of a horror scope hotline, but when you call, it just doesn’t tell you your fortune it tries to make it come true and the more you call the more demonic it’s predictions become when it starts to possess the soul of a virgin boy (That’s ironic in a slasher movie).

The whole thing is kinda unmemorable. In fact the only part that peak my interest is when this virgin boy goes out for pizza with his cousin’s girlfriend. It was the only indication that I actually saw this movie before, I remember that one scene above everything else.

But I did also like the scene that included a small appearance from Star Trek Voyager’s Robert Picardo which explained the origin behind the number.

Well, I love Robert Englund and I wanted to love this movie (especially sense I wanted to see it so bad I shelled out 4 bucks for it), but 976 Evil was not the best flick on the planet, and as bad as it’s sequel is I like it more.