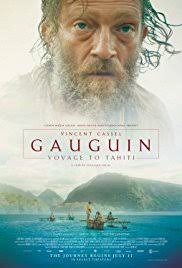 Bitter sweet inspiration about a man who truly struggled for his art.

I’ve been a fan of Vincent Cassell for years and he is the only reason why I wanted to see this movie when I saw the poster in a near by theater. Cassell plays Paul Gauguin, and artist who was willing to give up everything: his wife, his 5 children, all to travel down to Tahiti in hopes that the journey would make him a better artist. While down there he stars a romance with a woman who becomes his muse.

Cassell, himself was so good in the movie. It was a mixed bag of emotions as Cassell portrays a man willing to give up way too much to become a starving artist holding on to the dream that he would find pure inspiration. It was indeed a struggle, but Cassell’s performance also show a man who was focus on living his best life.

Another great yet low key performance was done by Tuheï Adams who plays Tehura, the muse who became the focus of many of  Gauguin’s painting. I felt the two of them together had enough chemistry to keep the movie going.

Overall, I went to see this movie for Vincent Cassell and I’m very stratified with his performance enough to be interested in the man he portrayed (ignoring how a movie set in the late 1800s is painting a clear picture of what Gentrification looks like today.) Plus Tuhei Adams was a pleasant bonus and I hope to see more of her

Altogether Cassell was great in it.

Previous: You Were Never Really Here
Next: Pincushion(That was Dark!)