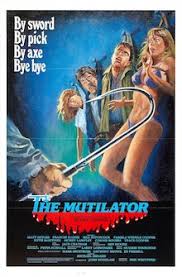 Not enough mutilating for my taste.

The fact that a few of the “stars” in the film seem to have the same last name as the Writer, Director, Producer, Buddy Cooper, and some of the one liner actors were really bad I’m going to say safely this was a real low budget one that the filmmaker made with his friends (like Sam Rami, with the Evil Dead only not as talented).

What I found interesting about this movie is the fact that Buddy Cooper seems to understand the rules of the slasher movie and showcased them greatly in a movie that I believe was made during the golden era (Actually it missed the “true”golden era by a mouth according to film historians being that it was released in January 1985). Slightly doing satire on the genre, and completely aware of the fact that it’s a slasher film, almost like scream but once again not as good. In fairness I think the fact the scream came out during the 1990s gave it a better angle on the golden era than a movie made so soon after.

Once again, can’t lie I saw Mutilator cause I herd there would be come naked breast in it. There was, but I got to admit the real talent in the movie did not do enough show and tell.
There was one chick who was super hot and well endowed but she took nothing off. She did made up for this with one of the most wicked death’s scenes I ever seen. Too bad the rest of the movie did not come correct like that.

Adding to the satire (I assume) may be the fact that so many men got killed (or maybe Cooper could not find women to be in the film). That’s probability why the death scenes stuck out so much to me, which is bad because the death scenes were really lame, in a movie that’s kinda lame.

Well give Buddy Cooper an A for effort, it’s hard to make a movie, even a bad one.