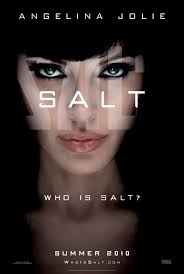 I remember when this movie first came out. I thought it was the bomb. Angelina Jolie had never done enough in the action realm in my book. It’s a shame. I understand her need to be a credible actor, so she did not try so hard to keep up her action star status, but considering how the action genre still needs female representation, I see this is definitely the movie goers lost.

Jolie plays salt, a CIA agent suspected of being a double Agent assigned to kill a Russian president. So she runs to prove her innocence, to stop the assignation and to find the man she loves who disappeared while she was being accused.

Originally met for Tom Cruse like Will Smith with Enemy of the State,  Jolie is one of those power houses that can replace a great movie star like Mr. Cruse. You can actually tell how this film was designed with Tom Cruse in mind. Most of the action sequences are chases throughout the film. No one does chasing like Cruse, and Jolie…can’t keep up that race, but she keeps a steady pace, making for some good action sequences.

Salt is a gem in the Jolie filmography.

Previous: Mulholland Drive
Next: Measure of a Man