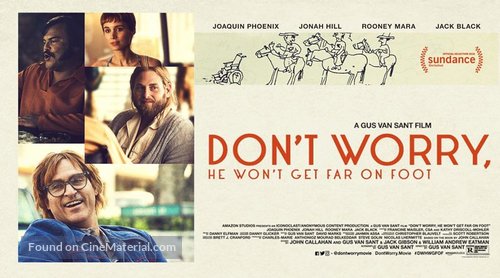 I found it to be a strangely dark comedy. Or rather it was funny despite the subject manner.

So technically a true story about a man named John Callahan who was an alcoholic and became paralyzed in a car accident because of his addiction to the bottle, but ends up living his best life due to his involvement with alcoholics anonymous.

So maybe not so dark now that I think about it as the story was uplifting and inspiring.

Joaquin Phoenix was a pleasure to see on the screen. Very lively and believable as a man chasing some demons, but keeping his sense of humor and positive attitude.

And we needed that liveliness as some of the 12 steps in the movie were not that flush out as well as others.

Jonah Hill also does a greet performance as John’s interesting sponsor. Is it Oscar worthy? I don’t know, but dude’s been nominated twice. Not saying I did not like him in the dramas he go the nod for, I did, I’m just saying I don’t know if it was Oscar worthy. It’s just like Jack Black whose in the movie and I love his role in the movie but I don’t know if it was any better than Jonah who would most likely be considered for an Oscar.

Well anyway I’m rambling. The biggest point is Gus Van Sant’s ability to do such a serious content and give it to us in a humorous way.