An obscure movie from Jackie Chan’s past. One of those flicks that he did before he became Jackie Chan the super star and he was just trying to cut his teeth in the business.
Chan does not even play the protagonist in the film. He’s one of the bad guys, a rare position for the international super star, but despite Chan not being the top draw in the film they have him on the cover of the DVD and the posters

I found this one: 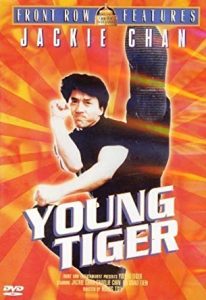 It’s funny cause the picture is actually of Jacking Chan from the movie Super Cop. It feels like the movie was released around the time when Chan was receiving super duper stardom in America and some small company tries to milk this by releasing everything Jackie Chan ever made to see if it would sell. A cheap ploy you see a lot in imported films, the movie even goes by two other names: Police Woman  and Rumble in Hong Kong (My favorite title as it indicates that who ever released this in America was indeed trying to milk Chan’s new status in the country.

The movie shows the raw basics of who Jackie Chan will become. The then 19 year old seems to have been hired for this flick as an over zealous stunt man who can also do the fight scenes. By the standards of what we will know about Chan it’s very tame. Regular one two punches done in that chop socky motion. Although we do get a few impressive stunts. I don’t know how well this movie did when it actually came out in 1973, but the film has moments in it that show you what an impressive stunt actor Jackie is. There is one scene in which  Chan goes up against a dude in a Taxi (Played by the actual protagonist in the film). I was not sure if it was actual him on top of that cab but you can tell form a distance Jackie’s whole persona shinning through. Then at the end Jackie falls off the top of the cab and as the driver tries to roll him over, Jackie runs and leaps onto a big crate and climbs it like a monkey. It was like watching a  baby crawl.

Though Jackie is the biggest thing to come out of the movie he’s not the only thing good about it. It’s a kung fu flick from back in the day and what’s surprising about it is that it takes place in a modern back drop rather than a less modern China. It is very different for a kung fu flick back in the day, and everything about this flick feels like an old school kung fu flick. From the strange pan in close ups to the iconic badly dubbed voice overs, the the only unique concept is that it takes place in the city of Hong Kong in the present rather than a country side village in a 19 century Kingdom.

It’s a movie all Jackie Chan fans should see to get the full aspects of the man, and it’s also worth it for all kung fun fans