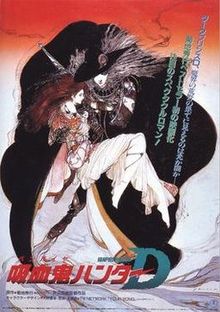 Possibly the best known out of all these flicks, D takes place in a far future where vampire exist, a Vampire count attempts to own the life of Doris Lang so she hires a hunter called D to handle things.

D somehow easily surpass other similar movies like Wicked City and Demon City. Though all seem to be inexpensive animations, Vampire Hunter D seems to have taken more time to make the animation more vibrant with a lot more fluid movement than the other movies. The horror is a little more eerie thanks to the animation, what it is lacking in comparison to the others is sexual content. It’s there, simply because it’s a vampire movie and they tend to have a sexual undertones, so it’s a lot more natural than other movies that overdue it with too Macho dudes so pumped up it’s more done as comedy. This also enhances the horror the movie is trying to be.

The movie also has some good sound effects that once again add to eerieness allowing it to be more horrifying than the rest.

Vampire hunter D came out in 1885 so it does seem like it’s the first and best of what looks like a few anime based horror films.

Previous: Demon City – Shinjuku: Not as good as Wicked City
Next: Black Water-Don’t be fooled by this poster.