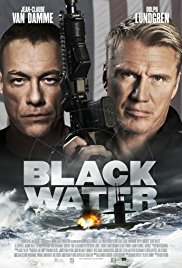 Looks like Jean-Claude Van Damme’s hair is going the way of Nicolas Cage’s.

The hair is a bad sign that this movie is not what I’m wanting from Van Damme. I see a lot of gun play, but I see no marshal arts.

It’s a Van Damme movie with Dolph Lundgren supporting in what looks like their version of the Stallone/Schwarzenegger lackluster Escape Plan (With a little of Steven Seagal’s Under Siege for flavor). They play two men trapped on a submarine being used as a CIA maximum prison.

Far be it for me to judge low budget filmmakers for trying to turn lemons into lemonade, but it looks like they spent all their money (Which was too much of their money) to put Van Damme and Lundgren on the poster (Then again, that’s the only reason why I went to see it, so money well spent).

I can’t help but to critique that submarine though. As Van Damme and some hot chick try to out run a group of mercenary-like prison guards I look around and totally see they wrote in the lines of the sub being refurbished so it can hold prisoners to try to through us off over the fact that it is not a sub. I felt like I was watching a cheap 1950s b- Sci-Fi it was so bad.

Other than that, Van Damme is totally phoning this shit in. I know he’s getting old, but I know he can still do the kicks and I got none of that. Barely any tasseling. A few gun battles but noting making this movie worthy of having two legendary action heroes in it. Lundgren most likely did not even do a week of work for his check he was barely in this.