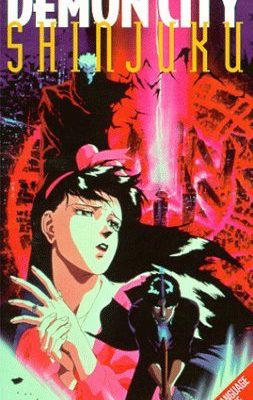 Similar to another Anime, Wicked City, Demon City is an animated horror film, which seems to have pretty cool demons being animated very well but the horror elements is not that exciting.

Demon City looks like a cheaply made anime overall.
Though there were some cool parts where the animation seems cool and lively, too much of the film is just about people talking, a but of a waste in my opinion when it comes to anime and animation.

I know that in the 80s there was a trend to make animation cheaper overall in japan. A lot of cartoons like G-Force and Robotech used certain techniques in order to make the animation inexpensive. Tricks that I see being done in this movie.

This movie also seems to be exploring the trend of adult themes in animation, not just in content, but in violence and sexual content. You see the same thing in Wicked City which came out around the same time so I’m guessing this was a thing in the late 80s.

I’m down with it, but I have to say that his movie is lame in comparison to Wicked City. I’ve seen Wicked City before I saw Demon City and wonder if I would like this more if it was the other way around? Both movies have so much in common they could almost be carbon copies.

Both have city in the title, both about demons, demons in which the female version seems to have the ability to stretch her body and merge with the dude she’s fucking. Both have laid back protagonist who just want to fuck bitches all day. It’s almost like one is the sequel to the other but the plot is different enough that most likely both are made by similar people.

Both also take a very slow pace that I think is offsetting in animation. When I see anime I expect things to happen that are not happening here. I know it’s done to create a frightening tone to the film which is another problem, I’m not horrified.

I did not like Demon City that much. I find it boring for an anime.