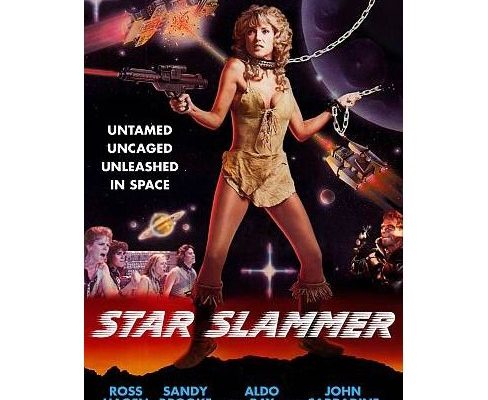 The name sounds familiar, but I don’t think I’ve seen it before. I think it’s also the name of a White Zombie song. Wonder if the song from the metal band is actually about the movie. Not too much of a stretch for it’s front man and lyricist Rob Zombie. Although this is not a b- horror film, it’s a b-Sci-Fi film set in space.

Slightly unique as it mixes the genres of space opera, fantasy and most interesting women in prison, which is the dominating genre done here.

A very cheap Sci-Fi movie at that,  which is ok simply because Star Slammer is more trying to follow in the footsteps of The Big Doll House and the Big Bird Cage, or more like the Arena starring Pam Grier (Well, actually all these movies star Grier). The Arena is a women in prison story with the twist of being set in the days of Gladiators in accent Rome. Off the top this movie really needs a Pam Grier to make it sizzle (that can be said for any movie of course).

It’s got some cliches like cat fights but missing others like a shower scene, but it does have the Lesbian Warden who likes to sample the new meat coming into the prison.

Though very cheap I’m very impress with the Sci-Fi element that the movie uses as a back ground. The prison is small but sets a tone, the costumes work (but were lame) and some of the alien make up was not bad. One of the aliens looks like it was recycled from this horror flick the Deadly spawn (Recommend this movie simple because these monsters are fucking scary).

Also has this scary mutant rat  that they made out of puppets. CGI can be freighting it’s not as disturbing and scary as a well made puppet.

For whatever reason the filmmakers decided that the cheap special effects on this flick was good enough to keep our interest. Plenty of hot women behind bars are featured in the film but only one gets naked twice. The lead actress who most likely  got paid a lot of cash to get naked twice. Nudity purposely inserted into the flick which makes it easy to take out. Just in case you wanted to make a PG-13 flick that you can sell to some cable network so they can show it as their After midnight cinema.

Overall, it’s an enjoyable adventure form the great director Fred olden Ray (no wonder I like it!)