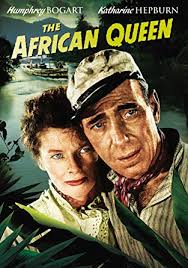 Home » Uncategorized » The African Queen (Number 16 out of 1,001- You should see Bogart before death)

I went through a Bogart stage early in my days of film exploration, getting to know the man from movie to movie. Bogart has coolness written all over him. From what I understand,  he’s not an attractive man, but he’s photogenic. I’m not sure if that means he’s better looking on camera than he is in real life but it’s one of the reasons he became an actor. I’m able to believe that he’s not as good looking in real life as it makes sense that Bograt was one of those dudes who found fame late in life. As a product of the Hollywood studio system, he was a bit prater being type cast as a gangster (This maybe the reason why when I think of old time gangster they sound like Bograt) until he made the Maltese Falcon, which made him an Icon in films. Now he’s a star at around 41 (Same age Samuel L Jackson got his biggest break in Pulp Fiction), getting to do some great parts like Key Largo, Casablanca and The African Queen.

I could have sworn I’ve seen the African Queen before, but I knew I had not once the movie first started streaming on my Netflix account.  The movie is in color and this was the first time I ever seen Bogart in that style. It’s funny, In color, now I can see a little more what they mean about Bogart not being the hottest actor of his day in the way of looks, but he’s still cool.

Katharine Hepburn also stars in the movie with Bogart. It’s a good combination, and I’m sure bouncing his skills off of Hepburn help with his Academy award win for best actor for this bitch.

So the African Queen is set in Africa, a part of the country colonized by Germans, but like I thought, it’s not about an actual Queen. My thinking at first was that he was in search of an object called the African Queen. Of course this thought had a lot to do with Bogie’s most iconic role of Sam Spade, who was looking for a statute. Instead the African Queen is a small river boat in which Bograt owns and uses it to help Hepburn, who plays a missionary giving God to the “savages”, get her British ass out of German territory before World War II effects the river they’re on. Hepburn is perfect in her role, a strong woman playing a strong woman who convinces the captain that it’s his patriotic duty to, rather than hide out on the river, do something they to help out when he explains to her that a German war ship can be access by the river.

It was an adventurous ride rolling down the river filled with dangerous like White water rapids, crocodiles, and of course the Germans  in some action packed sequences that still would hold up to this day.

But of course, the movie seems to be all about Borgat and Hepburn on a boat bouncing  the thespian craft off of each other. Hepburn is the complete package of woman, beautiful posed, smart and adventures, you can’t help but to fall in love with her, and to this day, who she is in this movie is a great example of feminism, as the two go down the river in the Queen as equals, and not as a man annoyed with his female passenger which is what I would have expected from a movie like this in the fifties. Then Bogart gives some of the best acting range I never got to see in his black and whites as he plays a complex man whose off type of his coolness (which only makes him cooler)

I’m not sure if this is the reason why this movie made the 1,001 movies you must see before you die but this film is so progressive even by today’s standards. Hepburn was not a ditsy woman only capable of being a preppy passenger . She saw Bogart needed help taking this ship down the river to implement her plan to help in the war, and she never backed down in the hard work needed to do the job. Bogart saw she wanted to help and rather than treating her like a a skirt who could not possible know anything about boating he realized he needed help and always excepted it, if he didn’t think she was capable he taught her how to be. There movies today that are not this perfectly feminist.

Definitely see this before you die. It’s over 60 years old and it stands the test of time so perfectly.