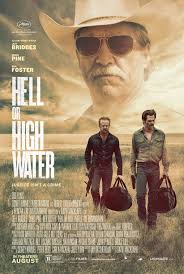 Nothing like a real great modern day western movie!

Look at Chris Pine trying to prove he’s not just a pretty face doing these small films that show his range, and show how he can do accents. But seriously, Pine was totally in his element here.

Jeff bridges gave a great performance that matches his cowboy ethics in True Grit, playing a very old school Texas Ranger hunting down Pine and Ben Foster who play brothers robbing banks. A little in the Archie Bunker Territory when dealing with his Mexican, Native American partner, but all the way likeable.

The music really adds to the cool western feel, putting me in the cowboy mode. I thought it was interesting that they had one scene in the movie in which real life cowboys herding cattle appear, in a movie about the movie style cowboys, and it’s some real cowboy stuff going on here.

It’s very macho without turning off the indi crowd that would love this film. There’s a scene in the movie when Jeff Daniels Character confronts one of the bank robbers and it was like Eastwood and Wayne back in the day, man. It just wraps up the whole vibe of the movie in one swoop. I feel like it’s the type of movie everyone in Texas should love.

And it’s very Texas (or rather what I expect from Texas): every dinner only sells streak, It’s hard to be a armed bank robber because at least two people in the bank carry a gun. The film does use Texas as a perfect pocket for all American life with the bank robbers having a bigger agenda to save the land they own and secure a future for their family, screwing over the bank that’s screwing them.

It has the same appeal of the Timber when it comes to today’s Westerns, but it’s setting in contemporary times but with that old fashion tone gives it an edge.

Previous: I Spit on Your Grave: Vengeance is Mine
Next: Little Men