Was looking for something to watch on amazon prime and this movie popped out. I love the poster. 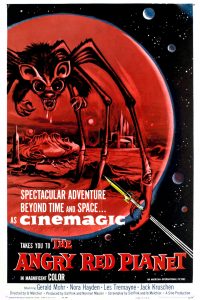 Wanted to see that Giant Spider in action.

Hate to burst your bubble. It’s not that it was not impressive. It is, even by 2017 standards. It was scary, especially if your not a fan of insects or rodents, which the spider, kinda ridiculously combines. As if whoever created it was like, I can’t decide which I hate more so I’ll combine it all. The problem is that there was not enough of the spider on the screen, but it was the best thing about the Mars trip.

The cinematography does this thing were they try to make the planet look red in both landscape and atmosphere . This along with most of the production design does not stand the test of time. By 2017 standards of not only film technology but space travel technology (which in all fairness was an infant 57 years ago), it’s hard to believe that the four people on the ship even left Earth and went anywhere.

One of the things that does not hold up by 2017 standards is the treatment of the lady scientist.  It’s a rather indifferent situation. Dr. Iris Ryan plays the sole survivor of  a trip to Mars, and when she comes back, the doctors attempt to get her to tell them what happen. She does this with a flashback of the dangers they encounter on Mars. Overall Iris acts as the main protagonist, in a final girl type of way. In 1959 she may have seem like a progressive woman, the daughter of a Scientist taking over her father’s career (Most likely the only child too). The three men all seem to focus on her, constantly flirting as they explore Mars from inside a room. Sure, she has enough sass to come back at them with a smart remark or two (all done with a smile on her face), but in retrospect, in 1959 I’m sure all the women (or at least all the men) thought she was the cool chick on the planet Mars, but looking at this now, it looks strangely like a parody of 1950s b-Sci-Fi vs. 1950s b-Sci-Fi. Might have a lot to do with the fact that it’s in color as well, when I’m use to seeing movies like this in Black and white.

The film is perfect for fans of the genre. It’s cheap sets an inaccurate science makes it so campy. The effects are real cheesy, but not as cheesy as the dialog, especially when focus on the only woman in the whole movie. Not sure what they thought of it when it came out almost 60 years ago but for me now it’s good for a chuckle.

Previous: The Greatest Showman
Next: Jumanji: Welcome to the Jungle