This was the movie everyone sneaked into see after watching Suicide Squad. 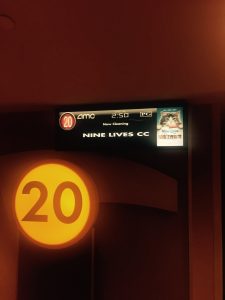 Well it was right there.

I kept thinking to myself, why would Barry Sonnenfeld make a movie like this?

Also thinking that House of Cards star, Kevein Spacey could have landed himself a better between seasons gig. So what’s going on?

I’ll tell you what’s going on, that cat is the reason why you want to see this movie.

Kevin Spacey’s soul gets trapped into a cat thanks to Christopher Walken, because he’s neglecting his family for his company. In his attempts to convince his family that he’s the cat, he starts doing the cutest things, thus becoming the longest  (Possibly the most expensive) Youtube cat video ever made .

There was one scene when the Cat (With Kevin Spacey’s voice), attempts to write a letter to his family stating he’s stuck in the cat. When the cat picks up the pen, my eyes popped out of my socket. Sure, as he starts to write you realize that this is CGI, but I was hooked.

From that moment on it became about when was this cat going to reappear on the screen. I should have known this was going to happen as the movie started out with clips of cat’s on the internet.

As great of as Spacey is at playing the jerk you can’t help but to love, That cat was the real movie star here. Every time it shares a scene with the little girl playing Spacey’s daughter in the movie I’m all like “so Cute”.

As you can tell I’m a cat lover. If you are a cat lover you might enjoy the film as much as I do. Other than that. it’s literally ninety minutes of nothing only worth seeing if you have nine lives to live.