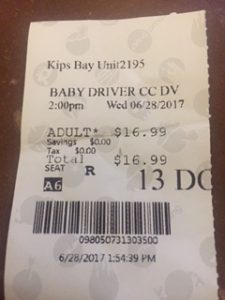 Oh yeah! that was cool!

Ansel Elgort’s attempt to break out of his young adult stereotype.
I’ve seen him in a few of them like The Fault in Our Stars where he plays Shailene Woodley’s love interest and The Divergent Series in which he plays Shailene Woodley’s—brother., but then, Elgort had a cameo in the young adult movie, Papertowns, and it was one of those things you would not get unless you watched a lot of Young Adult movies, and right there, I knew he was like the Jason Statham of these things or something.

Now he’s trying to be Statham for real. Statham himself was known prior, but he did not become a leading action hero until he did the Transporter, where he played a man who would drive you anywhere no matter what for the right price. In Baby Driver, Elgort plays a gateway diver more specifically. He works (without a choice) for a man named doc, played by Kevin Spacey, as the important part of his four man armed robbery crews. To make the character of baby (or to make Elgort himself) more interesting, the car accident that killed his parents when he was young also left a ringing in his ear that he needs to drown out using the ancient iPod 3 (I think), to play music that allows him to focus and be a masterful driver. Honestly the whole fact that Baby has this strangeness in personality seems stupid and cliché, but director Edgar Wright allows it to—drive the whole style of the movie, and I do mean style. One of the more stylish movies I seen in a while, I love how the music is steering the format of the film. They do this cool thing in which they match up the sound effects with the rhythm of the musical score. It’s brilliant, not too music video like but just enough to see the influence.
Plus, baby’s strangeness becomes interesting bather for the all-star ensemble cast, which includes Jon Bernthal and Jamie Fox, who both play very dangerous men who do not trust Baby because of his quirky behavior, and the fact that he seems too much like a good egg to be in this game (Most likely it’s also the face that would get him a lot of unwanted attention in prison). Jon Hamm is also in the film as a criminal whose contempt with Baby just getting the job done.

Adding to the style and musical connection is Flea of the Red Hot Chili Peppers who has a small role in the film as a crook. I totally love it when he just pops up in on a film. Paul Williams also has a cameo as bad guy in this one, too.

Baby driver is a pretty complete action movie with some great car driving and some cool chases. Very sleek and kinetic thanks to its energetic all-star cast. Definitely an Edger Wright film worth taking a look at (And I thought that would only be the case if Simon Pegg and Nick Frost where in it)

Previous: The Beguiled
Next: Tubelight