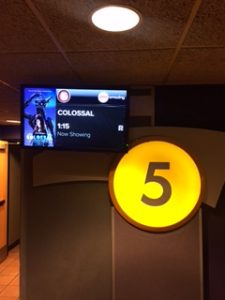 Man! That was strange.
So strange it’s hard to say weather it’s good or bad, it’s just weird. Then again, it’s a really good weird because you know, Giant monsters are in it. You can never go wrong with the Kaiju as they are known in Japan and not Korea where the Giant monsters end up in Colossal.

Anne Hathaway plays a woman who comes back home after being kicked in the face not wrongly by life and reconnects with her old friend played by Jason Sudeikis, and while home she discovers the oddest thing. At 8:05am every day if she’s standing in the park next to her old elementary school a Giant monster will appear in Seoul Korea that she is somehow linked to.

It’s like being John Malkovich meets Godzilla or something.

Once again Jason Sudeikis is the money maker for me, proving that he’s got some real star power. It was a brilliant turn as a man whose life got stuck and watching someone else like Anne Hathaway’s character live her’s despite failing badly at it, leaves him with a bitterness that he cannot hide for long. As Oscar, Sudeikis was just a very interesting character to watch on the screen.

Despite the plot about Giant Monsters hitting the far East, which really put this movie out there, Colossal has going for it a very grounded story about being away for something for so long that you forgotten why you tried so hard to avoid it, then realizing exactly why you did. There are other lessons about self esteem and bullying but I really connected with the  going back home can suck thing.
Previous: Altitude
Next: The promise